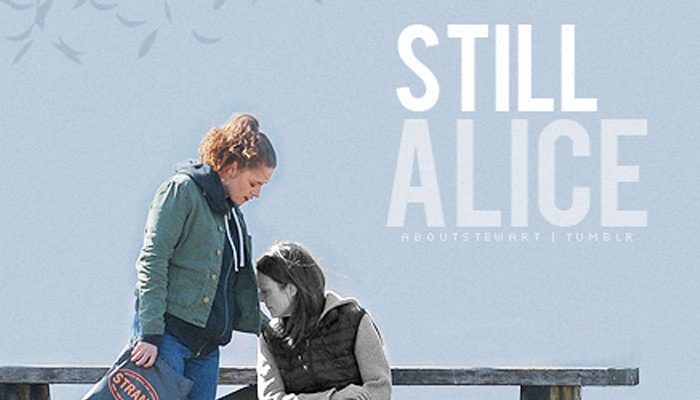 Hopefully, this is the first of many articles in English, as it is becoming increasingly difficult for me to produce anything that’s not substandard in French!

And I’ll kick off this new concept with Still Alice, a drama co-directed by Richard Glatzer and Wash Westmoreland.

Set in New York, the movie describes the life of successful linguistics professor Alice Howland, which is suddenly thrown into turmoil when she is diagnosed with an aggressive and rare form of Alzheimer’s disease, at the early age of 50. As the  Alice’s health deteriorates, more and more strain is put on her family life (Alice, we learn, is happily married with three grown children) but also her professional career.

The main purpose of the film is to outline the life of Alice and how she copes with the illness; therefore there are no gimmicks on how the movie is filmed: almost documentary-like, the camera is often fixed on the main protagonist, and settles for still shots that enable the viewers to focus their attention on the characters and their interactions. There are a couple of scenes where Alice speaks to her neurosurgeon and the camera only captures her talking while the doctor, out of sight, asks matter-of-fact questions. This very factual way of filming is constant throughout the movie and helps to set the scene for what looks like a testimony from Alice, her life and how she deals with the disease.

The way I understand it, the film follows a novel (from Lisa Genova) which describes the events from Alice’s point of view since the day she began to feel that there was something wrong with her memory until the point where she completely loses any coherent train of thought. As the author eloquently puts it « This is Alice Howland’s story, for as long as she can tell it ».

And at this stage the title Still Alice (which I mistakenly understood for immobile prior to watching it) takes its full meaning, as the movie portrays her for as long as she is still herself.

The film is really clinical, demonstrating what a dreadful disease Alzheimer’s is and its devastating effects on someone’s life, family and friends. The way Julianne Moore brings the character to life is really chilling, balancing the act between a thoughtful mother/wife/renowned professor and an irrational person who can ask the same question several times in a row or pees herself because she can’t find the toilets in her own house… It’s really captivating to see how the movie unfolds and how it captures the slow transformation of Alice into another person altogether. Julianne was, as a matter of fact, awarded an Oscar for her performance, and you can clearly see why when watching the movie. She really brings out a raft of emotions and the viewer can only empathise with how the degeneration affects her physical appearance: Alice looked healthy, full of life at the beginning and before gradually turning into a vegetable (for lack of a better word for it). You really feel for her, how she gradually cannot cope with the changes happening to her and the effects on her family, who do everything they can (or do they?) to support her in the ordeal she’s going through.

The story does not take any prisoners… we quickly learn that the disease has a 50% chance to be transmitter to her children! I won’t tell you what happens, but this piece of information makes the whole situation even more tragic when put in the context of other events happening in the story.

One of the most gripping points for me, and also tackled in the movie, is the question of taking one’s life when learning that inevitably one is going to slowly not be themselves, be engulfed in the disease and start turning against their loved ones. Once again, I will not spoil this moment but the viewer is left with their jaw hanging when the scene is screened.  Show ▼

Alice sets herself a series of questions that she has to answer every day on her phone. If by any chance she cannot answer any of them, she instructed herself to watch a pre-recorded a message leading her future self to swallow a whole bottle of very strongly sleeping pills, to never wake up…

Pretty bleak stuff, eh? But not entirely incredible – and that is what the movie conveys perfectly, a tragic situation that could happen to any of us without pity, and delivered by a solid cast of actors.

Definitely worth a watch, although be prepared to feel down as this is clearly not a one that will cheer you up!

The trailer is here for y’all: